I managed to get in on the second day of down-to-business game development at the NYU Game Center in Manhattan, where I found one remaining group in need of a dedicated artist. The game idea is a simple touch-based mobile game with a lot of potential, now tentatively known as primOrdial. I teamed up with the devs from Evertide Games in order to create a mockup for the game and create the vector art graphical assets. The game has a simple, minimalist art style that looks a bit like a diagram, but can be manipulated by touch or directional controls.

The object of the game is to create life, which is done by fulfilling certain criteria to jump-start the formation of life in a pool of water. That’s probably all we’ll be able to get up to, but if we add a water stage, we’ll already have beaten Spore! (I kid).

Quoting from my description:

Ahh, the endless cycle of life. The player has to carefully manage magma convection beneath the crust to create volcanoes and make sure that comets hit where they can create water. Then, they can jump-start life by hitting it with lightning from clouds. Later objectives may include caring for life once it starts evolving.

The planet’s cross section was initially realistic, but it was soon discovered that this would make it impossible to see anything on the surface. Thus, the atmosphere is much larger in comparison to the mantle, in order to let the player see the volcanoes forming on the planet’s surface. 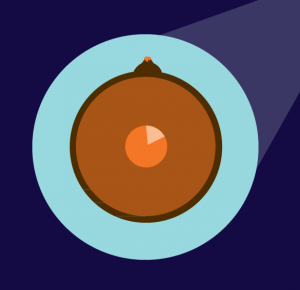 The core will alert the player to when it’s about to send out magma, which shoots upwards, eventually forming a volcano. The player must also gather water between two mounds/mountains and send the clouds that way to hit it with lightning.

The game will also have a short narrative which I am working on, but it will be quirky rather than serious.