Our first commercial project is Icebound, a visual novel set in a dark-fantasy world in the depths of an ice age.

A wanderer trudges across the frozen plain, dotted with tremendous relics that tower over the landscape. He stops, gazing at the glacier that rises before him – embedded within its wall, a battered gate half-covered by snow. “This is the place,” he says, brushing the snow from his tattered cloak. “This rumor had better be true.” “Oh, Dougal, you should know by now,” chimes a voice from the creature on his shoulder, “the rumors are never true.”

I’ve always wanted to create a visual novel, but it was an attempted collaboration that pushed me over the edge. Though it fell through fairly quickly, I have since taken matters into my own hands and now have Clement S. (Atnas), also of TIGSource, creating the character art, and Jane B., across the Atlantic in Europe, creating the backgrounds, while Artem Bank (Shojin) reprises his role as musician. The programming is being done in the Ren’py engine, which specializes in visual novel creation – as of yet, the game consists mainly of dialog choices, but there may be some added gameplay somewhere down the line. While the format is fairly traditional as far as visual novels go, the plot certainly isn’t.

First and foremost, Icebound is a piece of interactive fantasy fiction – I’ve tried to avoid the dating-sim cliches that appear in most games of the genre. It’s half-mystery, half self-discovery, set in a small place in a larger and even more enigmatic world. The characters here are all holding their own secrets, and you’ll have to find out what they are. Even the main character is disconnected from the player – there is no narration, simply dialog as it is heard.

The art is also not in the traditional anime style, and is painted for a more visually stimulating effect that sets it apart from most visual novels.

The estimated length of the game is a few hours – if it were an RPG, it would most likely be quite a bit longer, but this is a completely story-centric experience. Not many visual novels have come to the West yet, but the ones that have have been some of my most favorite games, and the phenomenon will hopefully continue to grow in the future. 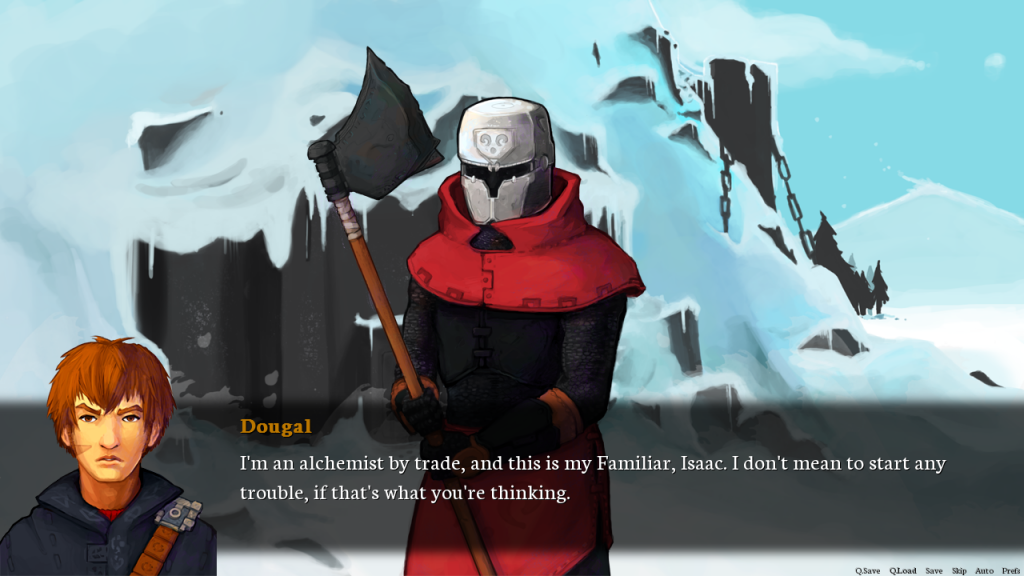